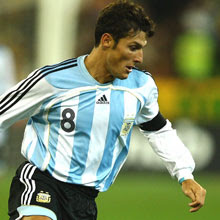 On 17 November 2007, Argentina defeated Bolivia, 3-0, in a World Cup qualifier before a crowd of 43,308 at Buenos Aires' Estadio Antonio V. Liberti. In that match, Argentina captain Javier Zanetti made his 116th appearance for his country, becoming Argentina's most-capped player.

Zanetti made his international debut on 16 November 1994. He represented Argentina for the 1998 and 2002 World Cups, but was controversially omitted from the 2006 World Cup squad by then-coach José Pekerman. Pekerman resigned after the tournament, however, and was replaced by Alfio Basile, who recalled Zanetti for a friendly against France on 7 February 2007. Since then, he has remained a mainstay of the national team, with 136 caps at present.

The match against Bolivia was a convincing win, with a first-half goal from Sergio Agüero (40') and a second-half brace from Juan Román Riquelme (56', 74'). Argentina struggled throughout the remainder of qualification, though, securing its trip to South Africa only on the last day with a 0-1 away win over Uruguay.