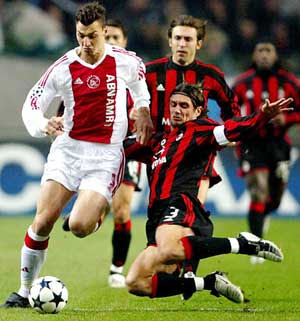 On 26 November 2003, Milan defeated Ajax 1-0 in a Champions League group stage match before a crowd of 50,000 at Ajax's Amsterdam ArenA. The match was the 100th European Cup/Champions League appearance for Milan defender Paolo Maldini and the fourth time the two teams had met in the Champions League in 2003.

Maldini signed with Milan as a youth player in 1978, then as a professional in 1984. He made his first European Cup appearance in the 1988-89 campaign, which saw Milan claim its third title in the competition. By November 2003, Milan and Maldini had claimed three more European Cup/Champions League trophies (1990, 1994, 2003).
Ajax and Milan had a long history together in the competition, dating back to the 1969 Final in which Milan beat the Dutch club 4-1. Ajax returned the favor in the 1995 Final with a 1-0 win over the Italians. The clubs met in the quarterfinals of the 2002-03 Champions League, with Milan emerging victorious by the aggregate score of 3-2.
Maldini's century match was the second leg of the 2003-04 group stage, with Milan having won the previous leg 1-0 at home. In Amsterdam, Ajax battled to 0-0 draw at the break, despite having had to withdraw their star forward Zlatan Ibrahimović in the 40th minute due to injury. In the 51st minute, Milan striker Andriy Shevchenko chested a Cafu pass in front of the goal and calmly put the ball into the net. Milan then held on for the 1-0 win.
Both Ajax and Milan lost their last group stage matches, Ajax to Brugge and Milan to Celta Vigo. Ajax's loss to Brugge dropped the Dutch club to the bottom of the table and out of the competition. Milan finished at the top of the table to advance to the knockout rounds where they successfully defended their title.
Posted by Brian Seal at 12:01 AM