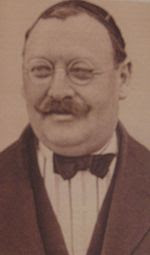 An avid sportsman, Gamper grew up in Zürich, where he helped found and played for both FC Excelsior and FC Zürich. He also played for FC Basel.

In 1899, he moved to Barcelona and, on 22 October, placed an ad in Los Deportes calling for people interested in forming a club. Several people responded and, on 29 November, they founded FC Barcelona. Gamper reportedly chose the club colors of red and blue, based on Basel's colors. He made 48 appearances for Barça between 1899 and 1903 and helped them claim their first silverware, the 1902 Copa Macaya.

By 1908, the club's fortunes had begun to fade. With membership declining, it appeared that Barça was on the verge of shutting down. Gamper volunteered to serve as president. He rejuvenated the membership and guided the club to an undefeated season and the 1909-09 Catalan Championship.

Gamper, who by then went by "Joan Gamper," the Catalan version of his name, returned to Switzerland. He subsequently became depressed over personal and financial problems and committed suicide on 30 July 1930.

In 1966, Barça established the Joan Gamper Trophy, an annual preseason friendly, in his honor.
Posted by Brian Seal at 12:01 AM