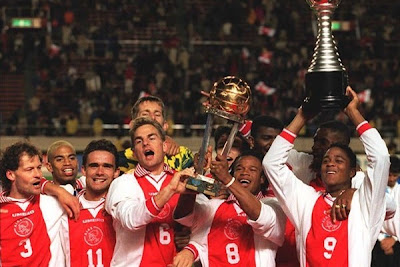 Established in 1960, the Intercontinental Cup matched the reigning European champion against the reigning South American champion. The Cup was initially contested as a two-leg home and away tie, but switched to a single-match format in 1980.
Both Ajax and Grêmio had previously participated in the Cup, with successful results. Ajax's prior appearance was in 1972 and ended as a 4-1 aggregate win over Argentinian side Independiente. Grêmio's earlier match was a 2-1 extra-time win over Hamburg in 1983.
In the 1995 Final, the two teams were even at 0-0 at the end of extra time, despite the Brazilian side losing defender Catalino Rivarola to a red card in the 57th minute. In penalties, the shooters got off to a rough start with Ajax keeper Edwin Van der Sar saving the first shot from midfielder Dinho, while the next two shots, from Ajax forward Patrick Kluivert and Grêmio defender Francisco Arce, were off target. The remaining kicks were converted, however, with Ajax center back Danny Blind scoring the decisive shot. Blind was subsequently chosen as man of the match.
Starting in 2005, the Cup was taken over by FIFA and renamed the FIFA Club World Cup.
Posted by Brian Seal at 12:01 AM