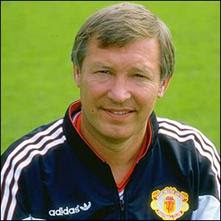 The Glasgow-born Ferguson began his career in football as a striker for his hometown club Queen's Park FC in 1957. Before he switched to management in 1974, he played for a number of Scottish teams, including Dunfermline Athletic (1964-67) and Falkirk (1969-73).
He began his management career with East Stirlingshire (1974) and St. Mirren (1974-78), but made his name with Aberdeen. He was in charge of the Dons from 1978 to 1986, leading them to three league titles (1980, 1984, 1985), four Scottish Cups (1982, 1983, 1984, 1986), and one Scottish League Cup (1986). He also enjoyed European success, winning the UEFA Cup-Winners' Cup (1983) and the UEFA Super Cup (1983).
Ferguson got off to an inconsistent start at United, finishing in 11th position his first season, then second place the next, and back to 11th in his third season. Midway through his fourth season, his job appeared to be in jeopardy following a poor start to the season that saw United limp into the new year in 15th place after taking two points from a string of eight matches between 25 November and 1 January. United stuck with him, however, and he led them to the FA Cup trophy that season.
Ferguson went on to a string of successes at Old Trafford, including 11 League titles, four more FA Cups, three League Cups, and two UEFA Champions League titles.
He also has received a number of individual accolades, including nine Premier League Manager of the Year awards. In 1999, he was knighted by Queen Elizabeth II for his contributions to football.
Posted by Brian Seal at 12:01 AM