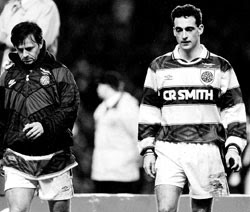 On 27 November 1994, Raith Rovers defeated Celtic on penalties before a crowd of 45,000 at Glasgow's Ibrox Stadium to claim the club's first (and, to date, only) Scottish League Cup.

Founded in 1883, Rovers had enjoyed some past success, winning the First Division in 1907-08, 1937-38, and 1948-49 (a season in which they also made it to their first Scottish League Cup Final, but lost to Rangers). They began to decline through the 1950s and '60s, including relegation to the second and third divisions, but had started a resurgence in the early 1990s, earning promotion to the Premier Division for the 1993-94 season (though they were relegated back to the First Division for the following season).
At the same time, Celtic were in the midst of an uncharacteristic fallow period, having gone five seasons without winning any major silverware. They were close to ending that streak against Rovers, after going up 2-1 in the 84th minute, but Rovers striker Gordon Dalziel equalized two minutes later.
The teams battled through extra time but could not break the deadlock, sending the match to penalties. Each side's first five shooters converted and it went into sudden death. Rovers went first and again found the net, so the tally stood at 6-5 Rovers when Celtic captain Paul McStay (pictured) stepped up for his kick. He sent it low to the left, where Rovers keeper Scott Thomson met it and turned it away, giving Rovers the victory.
Rovers returned to the Premier Division in 1995, but were relegated again in 1997. They currently play in the First Division.
Celtic finally ended their silverware drought in 1995 by winning the Scottish Cup.