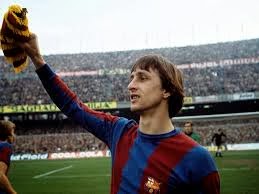 On 28 October 1973, Johan Cruyff made his Barcelona debut and scored twice in a 4-0 win over Granada.

He spent the previous nine seasons with Ajax, where he won six league titles, three European Cups, and the 1971 Ballon d'Or. His signing was a coup for Barcelona, who had not won the league since 1960 and who spent £922,000 to bring him to Camp Nou, almost doubling the previous world record of £500,000 (spent by Juventus on striker Pietro Anastasi in 1968).

The move was possible only because the Spanish federation finally lifted their ban on foreign players and it was helped by the fact that Barça's manager was Rinus Michels, who had coached Cruyff at Ajax from 1965 to 1971.

Real Madrid had first approached Ajax and believed they had reached a deal for Cruyff, but the player was offended by having been omitted from the negotiations and chose Barcelona instead. In an attempt to sort out the situation, the Spanish league withheld permission for Cruyff's participation for several weeks, then finally approved the Barcelona deal.

By the time he made his debut, Barcelona were near the bottom of the table, having won only one and lost three of their first six games. But Cruyff quickly lifted the team, scoring two on his debut to help get the victory over Granada. He went on to score a total of 16 in 26 appearances as Barcelona won the league and Cruyff won the second of his three Ballon d'Ors.

He remained with Barcelona for five seasons and later managed the team from 1988 to 1996, winning four league titles, the European Cup, and the Cup Winners' Cup.