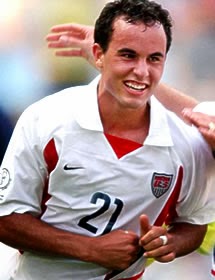 On 25 October 2000, Landon Donovan earned his first senior cap and scored in a 2-0 win over Mexico.

The eighteen-year old midfielder had already established himself as a rising star with the junior squads, including a performance at the 1999 U17 World Cup that ended with him being named the tournament's best player.

He was one of seven players given their international debut under manager Bruce Arena for the friendly against Mexico, played at Memorial Coliseum in Los Angeles. The others were Chris Klein, Kerry Zavagnin, Peter Vagenas, Bobby Convey, Sasha Victorine, and Joe Franchino.

Donovan didn't start, but came on in the 32nd minute after an injury to Chris Henderson, then scored in the 50th minute to put the United States up 1-0. Just under thirty minutes later, he provided an assist, sending in a cross from the left flank that was driven home by Josh Wolff, to set the final score at the now-familiar 2-0.

Since then, Donovan has gone on to become the team's all-time leading scorer with 57 goals and is the second-ranked appearances leader with 154, just ten behind retired midfielder Cobi Jones.