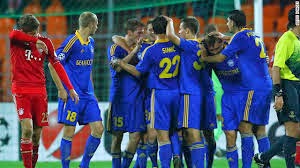 Borisov were making only their third appearance in the tournament proper, having previously reached the group stage in 2008-09 and 2011-12. Bayern, meanwhile, had a much deeper pedigree that included finishing as runners-up in two of the previous three finals (having already won four European Cups/Champions League trophies overall).

Playing at the Dynama Stadium in Minsk, Bayern seemed to have the match well in hand, dominating possession in the first half and creating several chances, but they were undone in 23rd minute. A wasted effort from Borisov's Aleksandr Volodko landed at the feet of teammate Aleksandr Pavlov, who scored with a tidy finish.

Bayern drove forward in search of an equalizer, but could not beat the Borisov defenders and goalkeeper Andrei Gorbunov until Franck Ribéry scored in the first minute of stoppage time at the end of the second half. By that time, however, Borisov had already gotten a goal from Vitali Rodionov (78'), then they added one from Renan Bressan right before the final whistle (90'+4).

Despite the result, Bayern went on to win the group and eventually advanced to the final, where they beat Borussia Dortmund 2-1. Borisov finished third in the group and moved into the Europa League Round of 32, but were eliminated by Fenerbahçe.