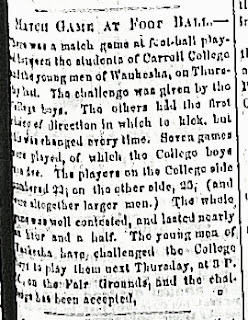 Modern football traces its origins back to the 1840s and some version of the sport appeared in the United States as early as 1862 when the Oneida Football Club formed in Boston. But the Laws of the Game were not adopted until 1863 by England's football association, who in 1866 were still the sport's only national governing body (Scotland did not form the world's second football association until 1873). The game in Waukesha was the first recorded instance of a match played in the United States under the new rules.

According to a report in the town paper (pictured), students at Carroll College in Waukesha challenged a group of local men to a game. It lasted close to 90 minutes, with the collegians winning 5-2. The teams enjoyed it so much that they scheduled a rematch for the following week.

Football began to spread throughout the United States, with other matches played in Connecticut and Rhode Island before the end of the year.

[For more information on the Waukesha match, read the article by Eric Anderson here.]