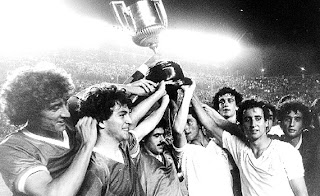 Known at the time as Castilla CF, the reserve team started in 1930 as an independent amateur side, then became affiliated with Real Madrid in 1948, with the larger club providing financial support in exchange for the right of first refusal for Castilla's players. By 1952, they officially became Real Madrid's reserve side.

Despite playing in the Segunda División in 1979-80, where they finished in seventh place, they reached the Copa del Rey final by beating a succession of top-flight teams, including Hércules, Bilbao, Real Sociedad, and Sporting de Gijón. Sporting ended up third in the final La Liga table, while Sociedad finished as runners-up, just one point behind Real Madrid.

But when Castilla faced off against their parent club at the Bernabéu for the final, it was no contest. Real Madrid took a 1-0 lead with a goal from Juanito in the 20th minute and never looked back, going up 2-0 at the break, then stretching the lead to 4-0 just after the hour mark (with the fourth goal coming from Vicente del Bosque, who later went on to manage Real Madrid for a successful four-year stint from 1999 to 2003).

Castilla finally scored when Ricardo Álvarez found the back of the net in the 80th minute, but Real Madrid added two late goals to set the final margin at 6-1.