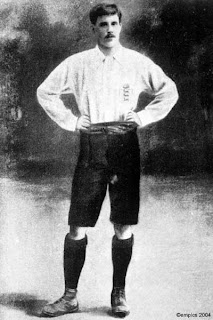 On 1 June 1909, England won their record 10th consecutive match, beating Austria 1-8 in Vienna. Even more impressively, it came just one day after their ninth win.

Coincidentally, their winning streak started with a victory over Austria almost one year earlier. After beating them 1-6 on 6 June 1908, they went on to defeat them again two days later, 1-11, then followed that with wins over Hungary, Bohemia, Ireland, Wales, and Scotland. They returned to Hungary in 1909 to record two more wins, with the second coming on 31 June, then traveled to Vienna to play Austria the following day.

Captain Vivian Woodward (pictured), who had scored four against Hungary the day before, continued his run of form, putting England up against Austria in the third minute. He went on to score twice more to complete his hat-trick and bring his two-day total to seven. He was joined on the scoresheet by Harold Halse and George Holley, who got two each, and Ben Warren, with one.

The winning streak stopped there, as England drew 1-1 with Ireland in their next match, played on 12 February 1910.
Posted by Brian Seal at 12:01 AM