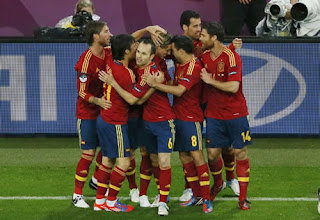 On 14 June 2012, Spain beat Ireland in the European Championship by the score of 4-0. And that wasn't even the most impressive stat.

It was the second match for both teams in Group C, with Spain, the defending European and World Cup champions, having drawn their first game with Italy and Ireland losing their first one to Croatia. They met at the PGE Arena in Gdánsk, where Spain wasted little time in setting the tone, taking a 1-0 lead with a goal from Fernando Torres in the 4th minute. Ireland managed to stem the tide for a while, but David Silva doubled the lead in the 49th minute, then Torres (70') and Cesc Fàbregas (83') completed the rout.

Spain's domination was reflected in the statistics, including possession (78% to Ireland's 22%) and shots (27 to 5, with 22 and 4 being on goal). But the most telling number was Spain's 859 passes--the most of any match in European Championship history. Xavi provided 136 of those, setting an individual Euro record.

The win sent Spain to the top of the group and they eventually reached the final, where they beat Italy 4-0 to repeat as champions.