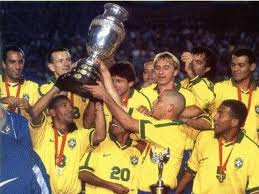 The reigning World Cup champions rolled through the group stage, winning all three of their matches, then advanced to the final with a 2-0 win over Paraguay and a 7-0 demolition of Peru. There, they faced Bolivia, the only other team in the tournament with a perfect record up to that point.

They met at Estadio Hernando Siles in La Paz, whose altitude of almost 12,000 feet above sea level has proven to be an asset to Bolivia, as visiting teams often have trouble acclimating. The tournament organizers clearly intended to use the location strategically, as Bolivia played all of their earlier matches there, while Brazil had played all of theirs in Santa Cruz, with a much lower altitude of 1,365 feet.

But Brazil managed to adapt. After going into the break level at 1-1, they went ahead with a goal from Ronaldo in the 79th minute, then sealed the win with a 90th-minute strike from Zé Roberto.