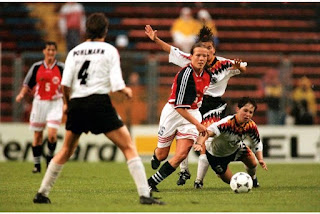 On 18 June 1995, Norway won the Women's World Cup with a balanced mix of overpowering offense and stifling defense.

It was the second consecutive final for the Norwegians, who lost the inaugural final to the United States in 1991. When they returned to the tournament in 1995, they quickly set the standard of quality, beating Nigeria 8-0 in their first match.They went on to win every game on their way to the final, including a 1-0 defeat of the United States in the semi-finals, conceding only a single goal and scoring a total of 21.

Their opponents in the final, Germany, had done almost as well, losing only once--a 3-2 defeat to Sweden in the group stage.

Playing at the Råsunda Stadium in Stockholm, Norway continued their demonstrate their balance, taking a 2-0 lead at the break with goals from midfielder Hege Riise (37') and forward Marianne Pettersen (pictured) (40'). It turned out to be the final margin, delivering the trophy that Norway had narrowly missed in 1991.