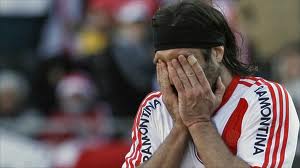 On 26 June 2011, River Plate were relegated to the Argentine second division for the first time in its 110-year history after drawing 1-1 with Belgrano.

Since winning the 2008 Clausura—their 34th national title—River Plate had fallen on hard times, including a last-place finish in the 2008 Apertura and a series of subsequent mid-table finishes. After a ninth-place finish in the 2011 Clausura, their three-year points-per-game average dropped to 1.237, which placed them 17th in the Primera División relegation table and sent them into a two-legged playoff against Primera B's fourth-place team, Belgrano.

River Plate lost the first leg away, 2-0, then hosted the second leg at the Monumental in Buenos Aires, where Mariano Pavone scored in the sixth minute to close the aggregate gap to 2-1. But they could not find another and instead conceded a goal to Belgrano's Guillermo Farre (62') to finish the series 3-1.

Before the match ended, the home supporters rioted, throwing objects at the players from the stands, then ripping seats out of the concrete. The situation was even worse outside the stadium, where police used tear gas and attack dogs in an attempt to quell the mob.

Despite the drama, River Plate returned to the Primera Division at their first opportunity and finished second in the 2013 Torneo Final.