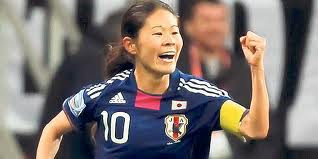 On 6 September 1978, former Japan national team captain and FIFA World Player of the Year Homare Sawa was born in Tokyo.

She started her footballing career at the age of thirteen with L.League champions Yomiuri Beleza, making thirteen appearances for them in 1991. She remained there for a total of ten seasons, scoring 79 goals in 136 appearances while winning league titles (1991-93). She spent two more spells with Beleza from 2004 to 2009 then again in 2011, winning another six league titles.

Sawa received her first call-up to the Japanese national team in 1993 and played a key role in their run to the quarterfinals in the 1995 Women's World Cup. She starred for them in the next four World Cups, and eventually captained them to the trophy in 2011 with a win over the United States on penalties in the final. That performance helped her win the 2011 FIFA Women's World Player of the Year Award.

She won silver with Japan at the 2012 Summer Olympics, then announced her immediate retirement from international football. She continues to play club football in Japan for Kobe Leonessa, whom she joined in 2010.