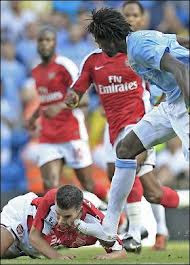 On 12 September 2009, Emmanuel Adebayor played against Arsenal for the first time since leaving the London club for Manchester City and, in the process, earned himself a three-match ban.

The striker played at Arsenal from January 2006 to July 2009, scoring a total of 62 goals in 142 appearances across all competitions. But his last days at the club were acrimonious before his £25 million move to Manchester City.

He started well with his new club, scoring in each of his first three matches. For his fourth match, City hosted Arsenal at Eastlands for what turned out to be a contentious affair. City were leading 1-0 in the second half when Adebayor tangled with his former teammate, Robin van Persie, slashing out at the Dutchman's face with his feet.

He did not receive a booking for the altercation, but did later when, after scoring to put City up 3-1, he ran the length of the pitch to celebrate his goal in front of the visiting Arsenal supporters. City went on to win 4-2.

Afterward, the FA reviewed the incident with van Persie and issued a three-match ban to Adebayor.