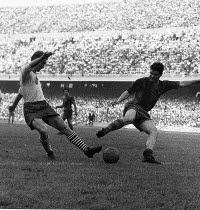 On 24 September 1957, Barcelona inaugurated the Camp Nou with a 4-2 win over a Warsaw XI in a friendly.

Built over a period of three and half years at a cost of 288 million pesetas, the stadium's original name was Estadi del FC Barcelona, but it has been known from the beginning as Camp Nou ("New Ground") (the club officially adopted that name in 2000).

For the inauguration, Barcelona hosted a crowd of over 90,000 for the friendly. Several dignitaries attended, including the Archbishop of Barcelona, who blessed the new stadium. A choir then performed the Hallelujah chorus from Handel's Messiah.

It took only eleven minutes for the home side to pull ahead, with striker Eulogio Martínez scoring the first goal. Barcelona got additional goals from Tejada, Sampedro, and Evaristo to win 4-2.

Since then, the stadium's capacity has increased to over 99,000 and it has hosted European Cup and World Cup matches.