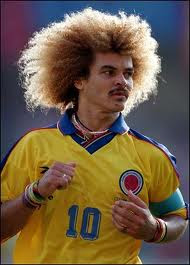 On 2 September 1961, midfielder Carlos Valderrama was born in Santa Marta, Colombia. He went on to become the national team's appearance leader with 111 caps.

Nicknamed "El Pibe" (the Kid) and easily recognized for his bushy blonde perm, Valderrama started his career with Unión Magdalena in 1981. By 1985, he was with Deportivo Cali and made his national team debut in a 3-0 loss to Paraguay and went on to captain the team for three successive World Cups (1990, 1994, 1998).

In the 1990 World Cup, he provided the assist for a stoppage-time equalizer against West Germany to send Colombia into the Round of 16 for the first and only time. He retired from international play after the 1998 tournament, having made a record 111 appearances.

Two years before that, he became one of the high-profile signings for the new American league, MLS, joining the Tampa Bay Mutiny for the league's first season in 1996. He later played for the Miami Fusion (1998), had another spell with Tampa Bay (1999-2000), and then one for the Colorado Rapids (2001-02) before retiring as the league's second-ranked all-time assist leader with 114.