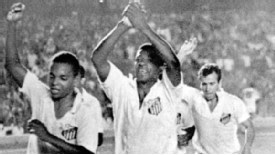 Peñarol were appearing in their third straight final after winning the first two editions of the tournament in 1960 and 1961. Santos, meanwhile, were in the final for the first time. The two teams had finished the first two legs with one win each, with the Brazilians taking a 1-2 victory in Montevideo and the Uruguayans returning the favor in São Paulo, 2-3.

Level with two points each, the tournament rules required a replay at a neutral venue to determine the winner. Playing before a crowd of 60,000 at the Estadio Monumental in Buenos Aires, Peñarol were wrong-footed early when their midfielder Omar Caetano put the ball into his own net in the 11th minute. Peñarol were unable to put the ball into Santos' net, however, while 20-year old Pelé, who had scored twice in the first round, doubled his tournament tally with goals in the 48th and 89th minutes to seal the 3-0 victory.

It proved to be the start of a strong international run for Santos, who went on to repeat as Copa Libertadores champions in 1963 while following both wins with victories in the Intercontinental Cup.