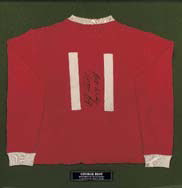 The shirt in question was the one worn by Best for Manchester United in a Fifth Round FA Cup match against Northampton Town on 7 February 1970. United won 2-8 with Best providing six of the goals, a record haul for the competition at the time. In 1996, a participant in a newspaper competition won the shirt as a prize, then held on to it for 10 years before putting it up for auction at Christie's, where it was expected to fetch between £20,000 and £30,000. Several bidders attempted to claim it and it eventually went to an anonymous buyer.

The auction included other football memorabilia, including the Fulham shirt worn by Bobby Moore in his last English league match (£3,600) and the 1970 FA Cup winners' medal awarded to Chelsea captain Ron Harris (£13,200). The day's biggest disappointment was the shirt worn by Brazilian midfielder Rivelino in the 1970 World Cup. Although Christie's expected the shirt to go for somewhere between £25,000 and £35,000, it failed to find a buyer.