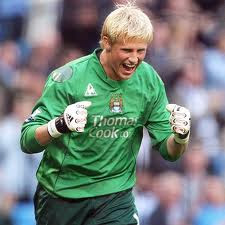 On 22 September 2007, fresh off a string off seven successful appearances, 20-year old Manchester City goalkeeper Kasper Schmeichel signed a new 4-year deal worth a reported £18,000 per week. And played for the club only three more times.

Schmeichel, the son of Manchester United legend Peter Schmeichel, signed his first professional contract with City in 2004, but spent the majority of the first few years of his contract on loan. But injuries to keepers Andreas Isaakson and Joe Hart before the start of the 2007-08 season pushed Schmeichel to the forefront.

He started City's first seven matches of the season, earning a record of four wins, one draw, and two away losses (both by the narrow score of 1-0) and getting his new deal as a reward. But, in the meantime, Joe Hart returned to fitness and manager Sven-Göran Eriksson chose him for City's next match, a 3-1 victory over Newcastle.

Hart became the permanent starter, relegating Schmeichel to the bench. He spent portions of the season on loan with Cardiff City, then Coventry City, before returning to Manchester for 2008-09. But he was still stuck behind Hart and made only three appearances for City that season, one as a substitute.

In August 2009, he joined Notts County, managed at the time by Eriksson, and then joined Leeds United in May 2010. In June 2011, Schmeichel rejoined Eriksson, this time at Leicester City, his current club.
Posted by Brian Seal at 12:01 AM