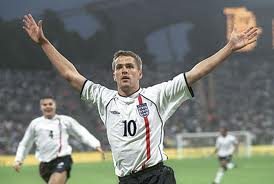 On 1 September 2001, England beat Germany 5-1 in a World Cup qualifier, with all five of their goals coming from Liverpool players.

The two teams have a longstanding rivalry, highlighted by England's win over West Germany in the 1966 World Cup Final. Going into the qualifier, the overall record stood at ten wins for England, eleven for Germany (including two on penalty kicks), and three draws. Germany had gotten the better of England in their most recent matches, winning six of the last seven.

In the qualifier, played at the Olympiastadion in Munich, Germany looked likely to continue their winning ways when forward Carsten Jancker opened the scoring in just the 6th minute. But striker Michael Owen (pictured), coming off a treble-winning season with Liverpool, equalized six minutes later. The teams remained evenly matched through the remainder of the first half, but Owen's Liverpool teammate Steven Gerrard blasted the ball into the German net from distance to put the visitors ahead.

The second half belonged to England, as Owen notched his second goal in the 48th minute, then completed his hat-trick in the 66th-minute after latching on to a precision pass from Gerrard and blasting the ball over keeper Oliver Kahn.

The day's last goal came from yet another Liverpool player, forward Emile Heskey, who completed the rout in the 74th minute.The four-goal margin of victory was the highest in the rivalry's history, beating the previous record of three set by England in 1935, 1938, and 1985.

England went on to win the qualification group and Germany finished second. But the Germans got the last laugh in the tournament proper, finishing as losing finalists while England fell in the quarterfinals (both teams were eliminated by Brazil).