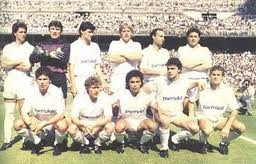 It was the last major domestic trophy that Real had yet to win (though they did win the tournament's predecessor, the Copa Eva Duarte, in 1947). When the Supercopa started in 1982, Real Madrid, as Copa del Rey winners, played La Liga champions Real Sociedad, but lost 1-4 on aggregate. When Real Madrid next qualified by winning the league in 1986 and 1987, the competition was not held in either year.

In 1988, they won the league for a third straight time, setting up a Supercopa meeting against Copa del Rey champions Barcelona. They got off to a great start, winning the first leg 2-0 at the Bernabéu with late goals from Míchel (71') and Hugo Sánchez (78'). That carried over into the second leg on 29 September, played at Camp Nou, when striker Emilio Butragueño put them up 0-1 in the 14th minute.

That proved to be the decisive goal, as Barcelona midfielder José Mari Bakero netted a brace (37', 77') to bring the aggregate score to 3-2. That's how it ended, with Madrid taking the honors.

Since then, they've gone on to win it a total of eight times, including 1989, when they won it automatically as winners of both the Copa del Rey and the league.