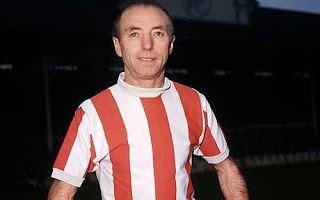 On 6 February 1965, Sir Stanley Matthews made the last of his 704 English league appearances. He was 50 years old.

A talented outside right forward known equally for his sportsmanship and dedication to fitness, Matthews played in England for an incredible 30 seasons. He spent the first 11 of them with Stoke City, joining the Potters in 1931 when they were in the Second Division and helping lead them to promotion in 1933. In 1947, at the age of 32, he moved to Blackpool for a fee of £11,500.

There, partnered with center forward Stan Mortensen, he advanced to the 1948 FA Cup Final, but lost. After finishing as runners-up again in 1951, they finally claimed the Cup in 1953 with a dramatic 4-3 win over Bolton in a match that has been dubbed "the Matthews Final" (even though Mortensen scored three of Blackpool's goals).

In 1961, the then-46 year old Matthews returned to Stoke, who had fallen back into the Second Division in his absence. He again helped them earn promotion in 1963, making 31 appearances that year. But age began to take its toll at last and he was reduced to 9 appearances in 1963-64 and had not played at all in the 1964-65 season until called upon for the match against Fulham on 6 February.

He took the field at 50 years old--the oldest player to appear in the English top flight--and lifted Stoke to a 3-1 victory. It was his only appearance of the season, after which he became the manager of Maltese side Hibernians.