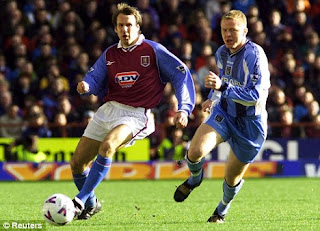 At the time, Villa were in fourth place and took the pitch that day at home against Coventry City, who were sitting in the relegation zone at 18th. Coventry had not won at Villa Park in 23 attempts and Villa had won the season's earlier fixture at Highfield Road, 1-2, so would have been understandably confident if not for the fact that they had taken only a single point from their last four league matches.

The visitors struck first when their Australian striker, John Aloisi, found the back of the net after 25 minutes. The situation grew worse for the hosts when manager John Gregory had to make two substitutions before the break, replacing Ian Taylor and Steve Watson with Mark Draper and Gareth Barry (still keeping a full English side).

Dion Dublin eventually scored for Villa from the penalty spot, but another goal from Aloisi and two stunning strikes from Dutch midfielder George Boateng ended the day 1-4 to Coventry.