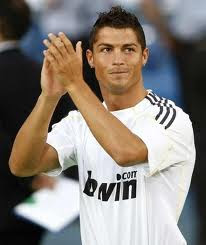 On 5 February 1985, the 2008 World Player of the Year Cristiano Ronaldo was born in Funchal, Portugal. He would go on to become the world's most expensive footballer.

A right winger, Ronaldo started his professional career in 2002 with Lisbon's Sporting CP. Only 16, he broke into the first team that year, making a total of 31 appearances and scoring 5 goals. In a friendly against Manchester United in the summer of 2003, he so impressed the opposing player that they urged manager Alex Ferguson to sign him. Ferguson complied, bringing Ronaldo to Manchester for £12.24 million.

Although frequently criticized by opposing fans and the media for simulation, Ronaldo blossomed at United, making 40 appearances in his first season as United lifted the FA Cup. More silverware followed, including three straight league titles (2007, 2008, 2009) and the UEFA Champions League trophy (2008). In the double-winning 2007-08 season, he scored a career-best 41 goals in all competitions and won both the Ballon d'Or and the FIFA World Player of the Year Award.

In the summer of 2009, he consummated a year-long courtship with Spanish giants Real Madrid, who paid a world-record £80 million to pull him away from United. He had an impressive first season in La Liga, scoring 33 goals in 35 total appearances as Real finished second in the league to Barcelona by a mere three points. He is on track to exceed that tally in his second season, having already scored 32 goals in 34 appearances, though Real are again trailing Barcelona in the table.