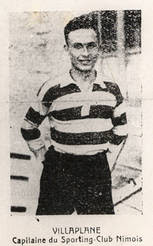 On 23 February 1930, midfielder Alexandre Villaplane captained France for the first time. He would later lead them in the 1930 World Cup before his execution in 1944 for collaborating with the Nazis.

Born in French Algeria in 1905, Villaplane was the first player from North Africa to play for Les Bleus when he received his first cap in 1926, a 4-3 victory over Belgium. He played in eighteen more matches before captaining the national team for the first time in his twentieth appearance, a 2-0 friendly loss to Portugal. Both of Portugal's goals were scored by 22-year old José Manuel Soares, a dynamic young forward regarded by many as one of Portugal's best-ever players. Unfortunately, he died the following year from food poisoning.

Villaplane suffered a tragic end of his own. After the 1930 World Cup--he was the captain for all three of France's matches--he lasted only five more years in football as match-fixing scandals and poor training habits drove him out of the sport.

During World War II, Villaplane became an SS officer, becoming known for his opportunistic and brutal methods, including several alleged murders. After the liberation of France from Nazi occupation, Villaplane was caught, tried, and then shot on 26 December 1944.
Posted by Brian Seal at 12:01 AM