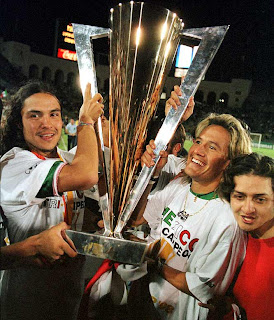 After going undefeated through their respective groups, the United States advanced to the final with a 1-0 victory over Brazil to set a record streak of six consecutive wins. Mexico, meanwhile, required an extra-time golden goal from forward Luis Hernández to get past Jamaica. That set up a final that was a rematch of the 1993 Final. That year, Mexico rolled to an easy 4-0 win over the US. They repeated as champions in the next tournament, played in 1996, with a 2-0 win over Brazil.

For the 1998 Final, the teams met at the Los Angeles Memorial Coliseum. Although the US were the ostensible home team, the 91,000-plus crowd predominantly favored Mexico. In a scrappy first half, Hernández powered a 43rd-minute header home from point-blank range past American keeper Kasey Keller for the game's only score.

Since then, Mexico and the US have met in two additional Finals, with the Americans winning in 2007 and Mexico in 2009.
Posted by Brian Seal at 12:01 AM