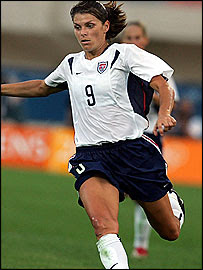 On 9 November 2002, the United States claimed their second consecutive Gold Cup with a 94th-minute goal from Mia Hamm in the Final against Canada.

The Final was a match-up of the tournaments two juggernauts, with both sides winning all of their earlier matches and conceding only a single goal between them (in Canada's 11-1 victory over Haiti in the group stage). The two teams also had a history against each other, with Canada losing to the US in the 1991 and 1994 CONCACAF Women's Championship before winning the title in 1998.

Playing before a crowd of just under 7,000 on a rain and fog-filled night at the Rose Bowl in Pasadena, the US took the lead with a shot from forward Tiffeny Milbrett. Canadian striker Charmaine Hooper equalized in first-half stoppage time, scoring the tournament's only goal against the US. The match appeared to be headed for extra time when Hamm, whose injured shin had limited her role to that of second-half substitute, chipped Canada's keeper from 18 yards out for the win.

By reaching the Final, both teams qualified for the 2003 Women's World Cup. There, they met in the third place match, with the US winning again, 3-1.
Posted by Brian Seal at 12:01 AM