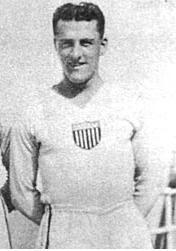 A prolific forward, Patenaude began his football career in 1928 with Philadelphia FC. But after only eight matches there (and one with J&P Coats) he moved to his hometown team, the Fall River Marksmen. There, he won three American Soccer League titles (1928-29, Fall 1929, Spring 1930) and the 1930 National Challenge Cup (the forerunner of the current US Open Cup).

He was called up to the US national team in 1930, just in time to take part in the first World Cup. He scored a goal in the US opener against Belgium, then made history by scoring the tournament's first-ever hat-trick as the US beat Paraguay 3-0. After Argentina ended the US run in their next match, Patenaude and his teammates toured South America, but he never played for the US again in a competitive match. In total, he was capped 4 times, scoring 6 goals.

Returning to the States, he played for a number of teams before retiring in 1936. He returned to Fall River, where he died on 4 November 1974--his 65th birthday.
Posted by Brian Seal at 12:01 AM