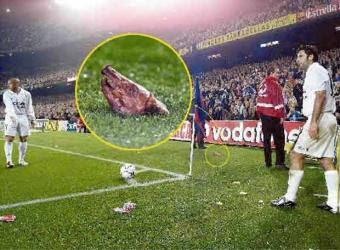 On 23 November 2002, former Barcelona hero Luis Figo returned to Camp Nou for only the second time since his controversial move to Real Madrid two years earlier. It did not go well.

Figo joined Barça in 1995 and quickly became a fan favorite, winning two league titles and the 1997 UEFA Cup Winners' Cup in his five seasons there. In 2000, Real Madrid lured him away for the then-world record fee of £37.2 million. The move did not sit well with the Barcelona faithful, who regarded the move to Madrid as the ultimate betrayal.

When Figo returned to Camp Nou in his first season with Real Madrid, he was subjected to taunts and jeers, but that was nothing compared to his appearance in 2002. By then, he had won La Liga and the Champions League with his new club, intensifying the state of the rivalry. By the time he prepared to take a late corner, emotions had risen to the point where people in the stands were throwing things at him, including plastic bottles, cans, and lighters. Someone even threw the head of a piglet and one of a rooster.

The situation grew so bad that the referee stopped the match for 16 minutes before allowing it to continue. It ended as a scoreless draw, leaving nobody satisfied.