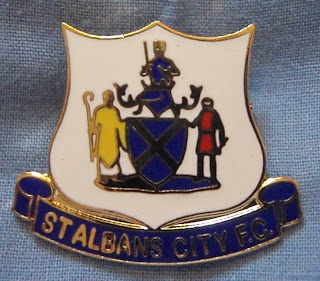 On 22 November 1922, Wilf Minter scored seven goals in an FA Cup match and still ended up on the losing side.

The match was an FA Cup Fourth Qualifying Round replay, pairing Dulwich Hamlet from the Isthmian League against Minter's side, reigning Athenian League champions St. Albans. Their first meeting ended in a 1-1 draw at St. Albans, with the hosts nicking a late equalizer.

Played before a crowd of 4,060 at Dulwich's Champion Hill, the replay featured emergency replacements in both goals, which undoubtedly contributed to the scoreline. After the first 30 minutes, Minter had his first hat-trick and St. Albans were leading 3-1. Dulwich rallied to go ahead 5-3 in the 60th minute, but Minter notched another hat-trick in the next 10 minutes to push St. Albans ahead, 6-5. With 5 minutes remaining, Dulwich scored again to send the match to extra time.

Dulwich struck first in extra time, but Minter again rose to the occasion, scoring his seventh to equalize five minutes from time. The teams appeared to be headed for another replay when a Dulwich player named Davis scored his fourth of the day to win the match 8-7.

Dulwich nearly repeated the feat 7 years later, drawing 7-7 with Wealdstone in the FA Cup Fourth Qualifying Round.
Posted by Brian Seal at 12:01 AM