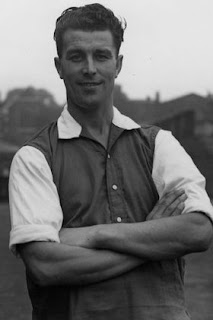 On 15 November 1950, Arsenal defender Leslie Compton received his first cap for England. He was 38 years and 64 days old at the time, making him the oldest debutant for England since WWII and their oldest outfield player ever to make his first appearance.

Compton--who was also a noted cricketer--had played for Arsenal since 1930, helping them win the league trophy in 1948 and the 1950 FA Cup. In the Gunners' FA Cup semifinal match against Chelsea that year, Compton scored a last-minute equalizer from a cross delivered by his brother to force a replay, which Arsenal won 1-0 before beating Liverpool in the Final.

His outstanding play that season led to his call-up for England's British Home Championship match against Wales that November, one of three players to make their England debut that day (the others were Lionel Smith and Leslie Medley). Played before a crowd of 59,137 at Sunderland's Roker Park, England went up 2-0 at the half before finishing the match 4-2.

Compton played only once more for England (a 2-2 draw with Yugoslavia at Highbury on 22 November 1950) before his retirement in 1952 . He died in 1984 at the age of 72 from complications related to diabetes.

England's oldest-ever debutant was Crystal Palace goalkeeper Alexander Morten, who was 41 years, 114 days when he played against Scotland in 1873.
Posted by Brian Seal at 12:01 AM