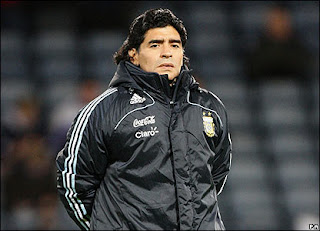 On 19 November 2008, Argentina embarked upon the new Diego Maradona era with a 1-0 victory over Scotland.

As a player, Maradona had led Argentina to victory in the 1986 World Cup, then to the 1990 Final. His playing career ended in 1994, but he remained a near-permanent fixture in the press due to his public battles with drug use and weight gain. He had been out of professional football for over 13 years when Argentina came calling again and had no managerial experience other than a year apiece at a couple of clubs in Argentina--Mandiyú in 1994 and Racing Club in 1995.

His first match in charge of the national team was the win against Scotland, thanks to an 8th-minute goal from Maxi Rodriguez. But poor results followed, including a record 6-1 loss to Bolivia in a World Cup qualifier on 1 April 2009. Argentina eventually did qualify, prompting Maradona to instruct to his critics to "suck it." But after cruising through their first-round group, they lost 4-0 to Germany in the Round of 16.

Amid conflicting reports about his future, the AFA announced on 27 July 2010 that they would not renew his contract.