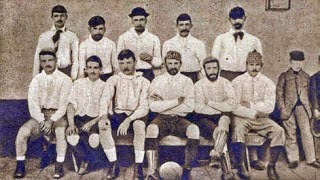 On 31 July 1899, Lobos Athletic Club completed the first-ever international tour by an Argentinian club, defeating Uruguay's Peñarol 2-0 in Montevideo.Lobos were founded on 3 July 1892 in the Argentinian district of Lobos, just over 100 km from the city of Buenos Aires. The side stretched the definition of "amateur," with only four or five players having any playing experience at all. By 1894, though, the club was one of the best in the country and joined the Football Association League of Argentina, which was based in Buenos Aires.

Lobos' tour consisted of two matches, both against Uruguayan sides in Montevideo. The first, played on 30 July 1899, was a 2-1 win against Albión. After the second match against Peñerol, a political revolt erupted in the capital, forcing the Lobos players to take refuge in a Royal Navy warship, which brought them back to Argentina.
By 1899, the other clubs in the League were unhappy about making the 100-km trek to Lobos for matches. They petitioned the League, who decreed that all teams must have playing fields within 50 km of Buenos Aires. Thus excluded from the League, Lobos dissolved shortly afterward.
Posted by Brian Seal at 12:01 AM