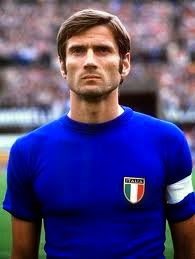 Facchetti played his youth football as a forward with his hometown club Trevigliese from 1956 to 1960, when he was discovered by Inter manager Helenio Herrera and brought to Milan. Herrera switched him to fullback, where he played an integral role in Herrara's catenaccio system. The system relied heavily on a strong backline in a 5-3-2 formation, with a libero, or sweeper, dropping behind the center backs.
Facchetti was a key member of the Inter team known as "La Grande Inter," which won four Serie A titles between 1962 and 1971, as well as back-to-back European Cup trophies in 1964 and 1965. He spent his entire professional career with the Nerazzurri, making 629 appearances (and scoring 75 goals) before retiring in 1978. In all those appearances, he was sent off only once (for clapping sarcastically in response to a referee's decision).

He also made 94 appearances for the Italian national team, winning the 1968 UEFA European Championship and finishing runner-up to Brazil in the 1970 World Cup.
He was elected President of Inter in January 2004, but served less than three years before dying of pancreatic cancer in September 2006.

He is one of 14 Italian players included on Pelé's March 2004 list of the 150 greatest footballers.