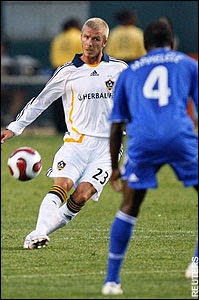 On 21 July 2007, David Beckham made his debut for the Los Angeles Galaxy in a 0-1 friendly loss to English Premier League title holders Chelsea before a capacity crowd of 27,000 at LA's Home Depot Center.

One of the most famous and marketable footballers in the world, Beckham's appearance had been highly anticipated ever since the January 2007 announcement that he was leaving Real Madrid at season's end to sign a 5-year contract with the MLS's Galaxy. At the time the announcement was made, Beckham had fallen out of favor with Real boss Fabio Capello and was spending a significant amount of time on the bench, leading to the general perception that he was coming to the US to wind his career down.
In the months after the announcement, however, his level of play and time on the pitch increased and Real pipped rivals Barcelona to the La Liga title. Real then tried to undo the Galaxy deal, but the MLS side held firm and Beckham crossed the Atlantic.
His Galaxy debut was uneventful, as a nagging ankle injury limited his training time and forced manager Frank Yallop to start the match with Beckham on the bench. Nevertheless, match broadcaster ESPN devoted substantial airtime to Beckham, at times splitting the screen with the match on one side and Beckham on the other.
With the Galaxy down 0-1, Beckham came on in the 78th minute to a standing ovation. His appearance had little impact, however, and the match ended as a 0-1 loss.