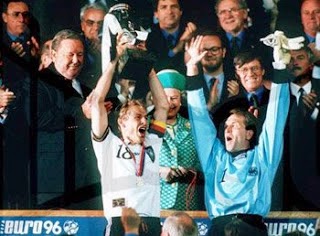 On 30 June 1996, Germany won the UEFA Euro Final with a golden goal in the 95th minute, defeating the Czech Republic 2-1 before a crowd of 73,611 at London's Wembley Stadium.

The teams met earlier in the tournament during the group stage. Germany won by the comfortable margin of 2-0, with both goals coming in the first half.
The goals did not come so quickly for Germany in the Final, as the first half ended scoreless. The Czechs went ahead 1-0 in the second half when midfielder Patrik Berger converted a penalty kick in the 59th minute. In the 69th minute, with the Czech Republic still ahead, German manager Berti Vogts replaced midfielder Mehmet Scholl with forward Oliver Bierhoff. The substitution worked, as Bierhoff equalized for Germany with his first goal of the tournament four minutes later, and regulation time ended with the match tied 1-1.
The 1996 tournament was the first European championship to apply the Golden Goal rule, which meant that the game ended upon the scoring of a goal in extra time. If, after two periods of extra time, no goal were scored, the match would be decided by penalty kicks.
As it turned out, however, no penalty kicks were needed. Bierhoff scored his second goal of the match (and the tournament) in the 95th minute, giving Germany the 2-1 win and the 1996 UEFA Euro title. It was the first major tournament to be decided by a golden goal.