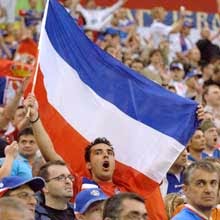 The Yugoslavian national football team had existed in various forms since 1920, when it represented the Kingdom of Yugoslavia. Its most successful squad during that period was the 1930 team, which reached the World Cup semifinals.
After a hiatus from 1941 to 1945 due to World War II, the team re-emerged under the banner of the Socialist Federal Republic of Yugoslavia. They enjoyed a strong period in the 1960s, finishing in fourth place at the 1962 World Cup and reaching the Final in both the 1960 and 1968 UEFA European Championships. At that time, Yugoslavia comprised six regional republics - Slovenia, Croatia, Bosnia and Herzegovina, Macedonia, Montenegro, and Serbia - as well as two autonomous provinces - Kosovo and Vojvodina.
In 1991, Slovenia and Croatia declared their independence, triggering the dissolution of the Socialist Federal Republic. In 1992, Serbia and Montenegro established the Federal Republic of Yugoslavia. Despite finishing at the top of their qualifying group for the 1992 UEFA European Championship, the Federal Republic was banned from participating in the tournament due to the ongoing civil wars among the former Yugoslav states. FIFA also banned it from participating in the 1994 World Cup.
In 2003, the Federal Republic officially dropped the name "Yugoslavia" and changed its name to Serbia and Montenegro for both the state and the national team. Montenegro then declared its independence from Serbia in 2006, resulting in the split between the two football associations and ending the last political union between former Yugoslav republics. FIFA recognizes the Serbian side as the successor to Yugoslavia.
Posted by Brian Seal at 12:01 AM