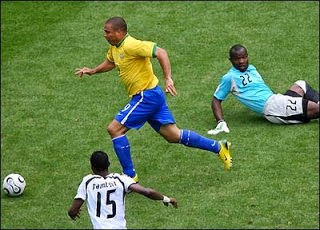 On 27 June 2006, Brazilian striker Ronaldo Luís Nazário de Lima scored in a World Cup match against Ghana. It was Ronaldo's 15th World Cup goal, breaking the previous record of 14 which had been set in 1974 by West German striker Gerhard "Gerd" Müller.

Ronaldo had already netted twice in the group stages of the tournament and was widely tipped to score the record-breaking goal in the Round of 16 against Ghana. Few predicted the speed with which he would score it, however. In the 5th minute, Brazilian midfielder/forward Ricardo Izecson dos Santos Leite ("Kaká") threaded a pass through to Ronaldo, leaving him one-on-one against the Ghanian keeper. Ronaldo sent the keeper the wrong way, slipped past him and prodded the ball into the empty net.
The goal also set another record - with his third of the tournament, Ronaldo joined German striker Jürgen Klinsmann as the only two people to score at least three goals in three separate World Cups.
Brazil went on to defeat Ghana 3-0, but lost to France 0-1 in the quarterfinals.