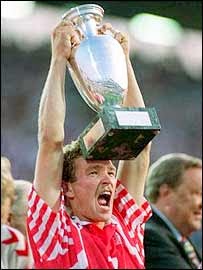 On 26 June 1992, Denmark won the UEFA European Championship, defeating Germany 2-0 before a crowd of 37,800 at Ullevi Stadium in Gothenburg, Sweden.

The Danes were unlikely champions, having initially failed to qualify for the tournament. They finished second in their qualifying group, losing out to Yugoslavia by a single point. On 30 May 1992, however, just eleven days before the opening day of the tournament, the United Nations issued a trade embargo against Yugoslavia in response to that country's ongoing ethnic conflicts. Yugoslavia was thus disqualified from participating and Denmark was called in as a replacement.
As to be expected from a team that had not been planning to play in the tournament, the Danish side got off to a shaky start, drawing with England (0-0) and losing to hosts Sweden (1-0), before finally securing a win against France (2-1) in its last group stage match. The win placed Denmark second in its group, just one point of ahead of both France and England, and sent the Danes through to the knockout rounds.
In its first knockout match, Denmark faced the Netherlands, who were the defending Euro title holders. After trading goals to finish 2-2 at the end of extra time, Denmark won on penalties, 5-4, to advance to the Final against defending World Cup champions Germany.
In the Final, Danish midfielder John Jensen (pictured) opened the scoring in the 18th minute. Describing his goal after the match, Jensen told the press: "The first 20 minutes of football were the hardest most of us had ever faced. The Germans were all over the pitch and we couldn't get into our play. We were working tirelessly and suddenly I had the chance to have a shot at goal. I remember the manager had said to me before the game that if I have a chance to take a shot, then I should go for it."
The Danes kept Germany from scoring and, in the 78th minute, Jensen's midfield partner Kim Vilfort added a second goal as unnecessary insurance. The match ended at 2-0, giving the Danes their first major trophy.