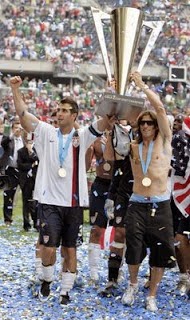 On 24 June 2007, the United States successfully defended their 2006 CONCACAF Gold Cup title, defeating Mexico in the 2007 Final before a crowd of 60,000 at Chicago's Soldier Field.

The 2007 tournament was the ninth Gold Cup competition, which includes teams from the CONCACAF regions of North America, Central America, and the Caribbean. The North American teams dominated the group stage, with only two losses among them. Both the United States and Canada finished at the top of their groups, with Mexico finishing second to Honduras in its group on goal differential.
In the knockout stages, the United States advanced to the Final with victories over Panama (2-1) and Canada (2-1), while Mexico secured its spot with wins over Costa Rica (1-0, a.e.t.) and Guadeloupe (1-0).
Both sides played aggressively, with El Tri dictating a fast pace. The United States struggled defensively in the first half and paid the price in the 44th minute as Nery Castillo placed a perfect cross for Andrés Guardado, who slammed the ball into the roof of the net.
The US came out after the break with even more energy. They equalized in the 66th minute, as forward Brian Ching was pulled down in the box by Jonny Magallón and US captain Landon Donovan drilled the ensuing spot kick home. Mexican keeper Oswaldo Sanchez played well, but was eventually beaten in the 73rd minute by a thunderous game-winning volley from US midfielder Benny Feilhaber.
It was the United States' fourth Gold Cup trophy, which tied them with Mexico for total Gold Cup titles. As winners, the US earned a spot in the 2009 Confederations Cup in South Africa.