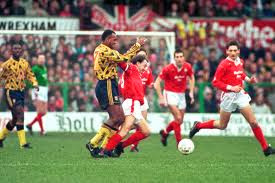 On 4 January 1992, Wrexham beat Arsenal in one of the biggest upsets in FA Cup history.

The third-round meeting matched the two teams at the far extreme points of the final Football League table from the previous season. Arsenal had finished on top of the First Division, while Wrexham ended the season at the bottom of the Fourth, spared from relegation only because Aldershot went broke and resigned from the league.

The gap had narrowed slightly by January 1992. With Arsenal sitting seventh in the top flight and Wrexham three divisions lower in sixteenth, they were separated by a mere 79 places, as opposed to their previous 92. Still, few people expected the Gunners to have any difficulty dispatching their lower-league opponents when they met in the Third Round of the FA Cup.

Played at Wrexham's Racecourse Ground, the match started off according to form when Arsenal took the lead with a goal from Alan Smith in the 43rd minute. Rather than press their advantage, the visitors appeared content to sit on the slim lead, which cost them late in the second half. In the 82nd minute, 37-year old Wrexham captain Mickey Thomas lashed a free kick into the net from 25 yards out to bring the hosts level.

Stunned, Arsenal conceded a second goal two minutes later to Steve Watkins and that was it. Wrexham won 2-1, eliminating the top flight title holders from the FA Cup.

They almost pulled off another upset in their next match, drawing 2-2 with Division One's West Ham, but fell in the replay at home, 0-1, to drop out of the competition.