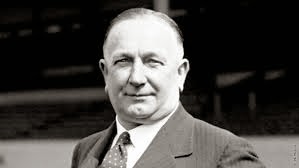 As an inside forward, Chapman enjoyed a long but itinerant playing career in England from 1895 to 1909, changing clubs every couple of years. In 1907, he started his managerial career as player-manager of Northampton Town before moving to Leeds City in 1912.He left Leeds City in 1918 amid a brewing scandal about illegal player payments. The club refused to allow the Football League to examine their financial records, which led the League to expel Leeds City in October 1919. The League also issued lifetime bans on five club officials, including Chapman. The club dissolved and its Elland Road grounds were soon taken over by the newly-formed Leeds United.After a brief period out of football, Chapman successfully appealed his ban and joined Huddersfield Town as assistant manager in February 1921. He became the full manager in March and led the club to the FA Cup trophy in the 1921-22 season and the league titles in the 1923-24 and 1924-25 seasons.In 1925, Arsenal lured Chapman away by doubling his salary to £2,000. Arsenal finished second that year, five points behind Huddersfield Town. In 1930, Chapman's Arsenal defeated Huddersfield Town in the FA Cup Final, claiming the Gunners' first major trophy. Additional successes soon followed, with league titles in 1930-31 and 1932-33.

He is credited with introducing several innovations to the game, including early adoption of the 3-2-2-3 "WM" formation, putting numbers on the players' shirts, and encouraging physical fitness through the use of strict training plans and physiotherapists. At Arsenal, he is perhaps best known for adding white sleeves to the Gunners' red shirts.
Chapman stayed with Arsenal until his death on 6 January 1934 from pneumonia.
Posted by Brian Seal at 12:01 AM