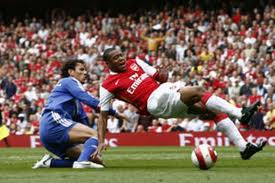 On 6 May 2007, Manchester United won their sixteenth league title after challengers Chelsea drew with Arsenal.

United started the season seeking their first league honors since 2003, with both Arsenal (2004) and Chelsea (2005, 2006) lifting the trophy in the interim. True to their mission, they claimed the top spot on 1 October and held on to it for the remainder of the season, with only Chelsea staying within touching distance. After beating Manchester City on 5 May, Manchester United were eight points clear of Chelsea, who had three games left to play.

The first of those three games was away at Arsenal. There, the defending champions suffered an early blow with the loss of defender Khalid Boulahrouz (pictured) to a red card in the 43rd minute. Compounding their injury, the foul led to a penalty that was converted by Arsenal's Gilberto Silva, putting them down 1-0 at the break.

Despite the man disadvantage, Chelsea fought back to earn a draw with a diving 70th-minute header from Michael Essien. It was the second 1-1 draw Essien had salvaged against Arsenal that season, but it wasn't enough to deny the title to United, who went on to win four of the next six trophies.
Posted by Brian Seal at 12:01 AM