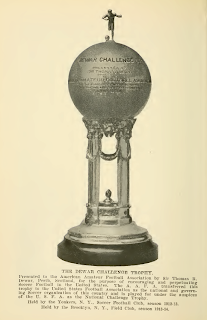 Originally called the National Challenge Cup, the tournament was established by the United States Football Association to compete with a similar competition started four years earlier by the American Amateur Football Association. But while that tournament was limited to amateurs, the National Challenge Cup was open to all teams across the country, making the first truly national competition in the United States.

While almost 300 teams received invitations, only 40 chose to participate. Most of those came from the northeast region, though Chicago was also represented. But, in the end, the final came down to a pair of teams from Brooklyn.

They met at Coates Field in Pawtucket, Rhode Island, where a large local crowd turned out for the event. It took only three minutes for Brooklyn FC to take the lead with a goal from their captain, Percy Adamson, but Celtic equalized with a 27th-minute penalty from Thomas Campion.

The match remained level deep into the second half, then, with three minutes remaining, FC pushed ahead again when James Ford found the back of the net to win the cup, known as the Dewar Trophy (pictured). It was part of a double for FC, who also won that season's NAFBL title.
Posted by Brian Seal at 12:01 AM