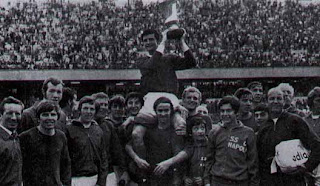 On 28 May 1970, Swindon Town won the inaugural Anglo-Italian Cup, beating Napoli 3-0 in a final that had to be abandoned in the 79th minute.

Founded by Italian agent Gigi Peronace, who had dealings with several English clubs, that first tournament included a total of twelve teams--six from each country. The Italian clubs--Napoli, Juventus, Lanerossi, Roma, Fiorentina, and Lazio--all hailed from Serie A, finishing between third and tenth at the end of the previous season. Meanwhile, only four of the English clubs--Wolverhampton, West Brom, Sunderland, and Sheffield Wednesday--had been in the top flight for 1969-70 (and both Sunderland and Wednesday were relegated). The other two teams were Middlesbrough and Swindon, both from the Second Division.

Swindon were unusually prepared for the competition, however. As the 1969 League Cup champions, they played a two-game series that year against the Coppa Italia holders, Roma, and won 5-2 on aggregate. They continued that dominance in the Anglo-Italian Cup, winning three of their four group-stage games against Juventus and Napoli. Their one defeat was a 1-2 loss to Napoli and they got an opportunity to avenge that result when they met Napoli again in the final, played at the Stadio San Paolo in Naples.

There, Swindon midfielder Peter Nobles put them up 0-2 with goals in the 24th and 58th minutes. Forward Arthur Horsfield added a third in the 62nd minute, prompting a section of the home fans to hurl rocks and bottles onto the pitch. The police responded with tear gas, which served only to further aggravate the supporters, who then began to start fires and rip seats out of the concrete. With eleven minutes left, the referee sent the players into the dressing room and abandoned the match.

Despite the incidents, the Anglo-Italian Cup continued to be played annually through 1973 and was revived briefly from 1992 to 1996.
Posted by Brian Seal at 12:01 AM