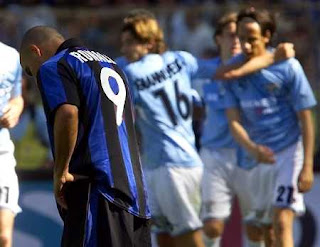 On 5 May 2002, Juventus completed a remarkable run to the Serie A title, thanks in part to a season-end collapse by Inter.

It was the last day of the season and Inter had been at the top of the table since 24 March. On 30 March, they had a six-point lead over Juventus, who were then in third, with Roma in between. But Juve went on an unbeaten run to climb into second, while an Inter loss to Atalanta and draw with Chievo saw their lead shrink to a single point. Roma had dropped to third, but were separated from the top by only two points.

All three teams were away for their final matches of the season, Inter at Lazio, Juventus at Udinese, and Roma at Torino. In his pre-match conference, Roma manager Fabio Capello took a fatalistic approach to the day, saying that he expected all three teams to win, leaving the table unchanged.

As it turned out, he was two-thirds correct. Both Juventus and Roma went on to win--0-2 and 0-1, respectively--but Inter fell hard to Lazio. Despite taking a 1-2 lead in the first half, they went into the break level at 2-2, then surrendered a pair of second-half goals to fall 4-2.

The results pushed Juventus into first, Roma into second, and Inter into third.